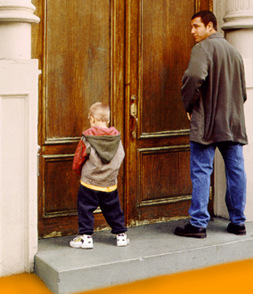 It’s Official, I’m a Dad and What To Do if A Girl Says She is Pregnant

It’s Official, I’m a Dad and What You Should Do if A Girl Says She is Pregnant The other day I arrived at the DNA lab to view the results.

So there’s still a chance he’s not mine… just kidding ;).

But seriously, I thought I would share with all the Swoop readers out there a big part of my current life. There is a lot for other traveler’s to learn from my experiences in this and I could give you information that could save you tens of thousands of dollars. Here’s what you should know about girls saying you have a kid in the Dominican Republic (applies to many countries around the world).

Around 2 and a half years ago, I visited the Dominican Republic for the first time. I felt like a kid in a candy store and I got laid more in my first month here than I did at any other point in my life. You may have checked out my article How I Banged 31 Dominican Girls in 25 Days.

I wasn’t sure if the baby was mine, I had no way of keeping track of all these girls and didn’t have the slightest clue whether or not I was the only guy they had been with. I opened up her phone and Facebook, with her right there and combed through her messages, checking to see if she had recently slept with a different guy. Nothing appeared, but it still didn’t mean anything was sure.

She was a sweet girl, so I really gave the relationship a chance. I lived with her for a month and tried to see if it was possible. It wasn’t. I left Dominican Republic and said I would be back the next year.

The next 8 months I sent her money monthly and got constant updates on the state of the baby. The fact I sent money is something I want you to remember, because it’s something we will talk about later.

When the baby was born, he looked very similar to me. This was pretty interesting because he is a mixed race baby and I am 100% white. To be honest I couldn’t help, but start to love this miniature, brown me.

This new found fatherly love forced me to give it another shot with his mother. Another month together and I just wasn’t happy. This was the end of my attempts at a relationship with her. My Christian upbringing made me try, but I don’t think these things can be forced.

The next year I came back and I while I was talking to the owner of a paternity testing lab, I learned something very interesting.

In 91% of the Dominican/foreigner couples, the foreigner is not the father.

You did not misread that. 91% of the couples who came into this guy’s DNA testing lab in the last 10 years, the foreigner “father” was not actually the father. These Dominican girls who had “not slept with another guy” would angrily say there was a mistake. But nope, there was never a mistake.

But looking at the big picture you can understand why these Dominican girls do what they do.

Why Dominican Girls lie and say a foreigner is the father

Back to my story

So I talk to this guy and I look at pictures of my kid and doubts start to sink in. “If 9 out 10 foreign guys who come to this guy leave realizing they have been duped. Why hadn’t I taken the test yet?”

He looked so much like me, but I knew I had to get him tested which brings us back to the beginning of this article.

Yeah, he was mine. It was a relief because of all the time, money and feelings I had invested in him.

What I haven’t mentioned up until now, is that the reason I was talking to the owner of this DNA testing center was because I was getting another little Dominican baby tested. This time, a girl had claimed I was the father of the baby. I had checked her Facebook nine months earlier and saw she had been with another guy around the same time. So basically I was very skeptical.

During the whole pregnancy her and her family pushed for me to help her out financially. But after she lied to me about being with another guy, I knew I wasn’t sending her a penny until I got a paternity test. All sorts of tantrums ensued via Whatsapp from her, her aunt and her mom.

When I got the paternity test back and looked at the results.

“There must be a mistake.” the girl said and her mom demanded I take another paternity test. I told her I would if she paid back all my expenses thus far (like 300$, mostly just the paternity test). Of course she would never do it. And that was that.

This is not the only time a girl has said she was pregnant by me. Luckily, I have a ton of experience with women and I can tell when something is shady.

I’ve had a girl claim to be pregnant even though we wore a condom and I never actually came. Lol. That ridiculous lie didn’t hold out long, as I simply didn’t believe her.

Basically I think I have learned from experience what foreigners should watch out for, and here I will use that experience to give you guys a little guide about what to do if a girl says she is pregnant.

What you should do if a girl says she is pregnant

Now, I would say when you are dealing with European women and some other types of women, you shouldn’t treat it the same way, but with a girl from a country like Dominican Republic, you should make sure you go down this list:

If you guys have read the blog, you have known how crazy awesome the last half decade of my life has been. Having this kid has kind of calmed me. I’m not the ideal father, but I do support him and I will visit him every year. The feeling I get just looking at him is something I have never experienced and I always have a desire to send pictures of him to friends and family. Any chance I get to brag about him, I want to do it. I feel just like the the annoying dad’s I have on my Facebook ;).

So yeah, it was an accident and it was with a girl I had no long term future with, but overall it has been a great experience. It has made me think that I will get married and have a stable family one day. Something I thought for a long time…. would never be possible.