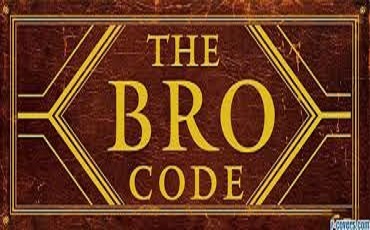 Yes, it is time, time that I introduce to everybody on on Swoop the World the bro code: wingman rules for meetups, traveling, seducing, etc.. You may want to bookmark this page because this bro code could end up saving countless relationships with good bros.

The bro code is meant to be a go-to set of rules for wingmen, friends and guys who meet through Swoop. It is a code we must live by if we want to minimize problem while seducing girls, partying and traveling with friends. I want the forum to be a great place to be able to find like minded guys you can travel and go out with to pick up girls and have adventures. That’s why I started this bro code on the forum (click here to see the original thread). The golden rule is the foundation of the bro code. It’s the rule that, if followed, will nearly always nearly always lead to a great time by all the bros involved.

Rule 1: Bros before hoes
A player always knows that a good bro is priceless. His worth is more than 10,100, maybe even 1000 hoes. To really live the Swoop Bro Code one must internalize this Bros before hoes mentality. A bro must understand that there are plenty of hoes in the sea. After all, hoes come and go but a good bro will be there forever.

The next few rules are wingman rules. These are very important while picking up girls. These wingman rules will help you and your friend both to get laid and to operate at an optimum gaming level.

Special thanks to SmoothOperator who basically wrote this section.

Rule 2: Initial priority
The person who opens the set gets priority pick of the hoes during the interaction, up to his second date without sex. During that period, the wingman shall not seduce the opener’s target, even if the opener is (tactically) not giving attention to her.
The initial priority period can be extended in mutual consent up to a third date in case there is a comprehensible reason that the opener could not lay his target yet.

Rule 3: No reserve pussy
If the opener’s target shows clear interest in the wingman during the initial priority period, the opener’s priority is waived. As a matter of courtesy, the wingman will discretely inform the opener about his wish to call upon this rule, which the opener may not unreasonably withhold.

Rule 4: Freelance wingman
In case there are no other hot women in the set besides the target, the wingman may leave the set if he wants after at least 15 minutes have lapsed. Rule 5: A Bro Is Only Obligated to Wing Once a Night
Going with the above rule, if a wingman is not in a social mood, he is not required to wing. However, there is a clause that a wingman must wing his bro at least once a night, so if your bro calls for this exception, one must wing her even if the girl’s friend is very unattractive. That being said, a good wingman will wing his bro whenever possible.

Rule 6: Gentleman wingman
If one is interested in a woman already laid by his wingman, permission to seduce shall be asked. Permission is ought to be given in case the wingman is no longer interested into her anymore, or not fucking her anymore. Rule 7: Hoes from a bros social media
If one gets a message from a hoe, who is already friends with one’s bro, he must first ask permission of said bro before accepting this request or engaging in conversations. This rule goes with putting bros before hoes because one never knows the situations of said relationships without asking.

Rule 8: Ex Girlfriends
One will always get the permission of a bro before pursuing any girl that bro has ever dated. No exceptions. An ex girlfriend, for this rule is simply defined as any girl your bro has had sex with. Your bro has the right to deny any of these requests, one must keep in mind: there are more hoes in the sea.

Rule 9: Always have your bros back
If your bro is in trouble in any way (girl, getting beat up, family issues, etc.) a bro must always have his back.

Rule 10: Questions by a bros girls
If any girls of ones bro asks about the whereabouts or inquires about other girls, one knows nothing. The only time one should answer this question differently is one was instructed to by his bro.

Rule 11: Dress to impress
If one will be going out with a bro, one must make sure to find out what the appropriate dress code is for the venue. It will hurt your bro if one shows up under-dressed.

Rule 12: Bros cannot make eye contact during a devil’s threeway (double team)
Special thanks to Barney from How I Met Your Mother on this rule. This is something Swoop has had to deal with, Triple teaming a Japanese girl. If one ends up double or triple teaming a girl, no eye contact. Another little addition is that your balls shouldn’t ever touch

Rule 13: A bro must pay for his share
In any situation, the check must be split equally between bros. A bro must always pay his share. The only exception being if another bro offers to take the bill, however a bro must never ask for this.

Rule 16: Helping a bro look good in front of his target
One has an obligation to his bro to help him look as good as possible in front of the girl he is trying to seduce. One fulfills this rule by talking a bro up, not showing a bro up or anything at all that helps one’s bro look better to the girl he wants. This means that one must never talk bad about a bro to a girl… never.

Rule 17: If one has a problem with a bro
If one runs into a problem with a bro, he must not talk bad about a bro behind his back or in front of anybody outside of the brotherhood. Ideally one must bring this problem directly to the bro, to fix the problem. Rule 20: Making a promise to a bro
A promise between bros is sacred and must always be kept.

Rule 21: Flaking on bros and being late
Flaking is what chicks do, not bros. One must never flake on a bro under any circumstance. If something important comes up, one must notify his bro at least an hour before. One must do his best not to be late to meet a bro, if one does end up late he should apologize for his mistake.

Rule 22: Never leave a bro hanging
If a bro requests a fist bump, high five or anything else, one must never leave his bro hanging.

Rule 23: Bros before phones
If one is out with a bro(s), he must always live by the bros before phones rule. That doesn’t mean one can’t check his phone, but one must not do it often so as not to kill the vibe.

You Can Contribute to The Bro Code and WingMan Rules

If you know of any rules that should be added/edited to the Bro Code and wingman rules, let us know in the comment section below (or in the forum). This page will be updated throughout time as we refine the Swoop Bro Code to perfection.

Here at Swoop The World, we believe in Rule #1 Bros before hoes, this is the foundation of the Swoop Bro Code Brotherhood. By following these rules you will be a great friend and you will create a brotherhood that will withstand the tests of time.

Check the original thread on the forum here.