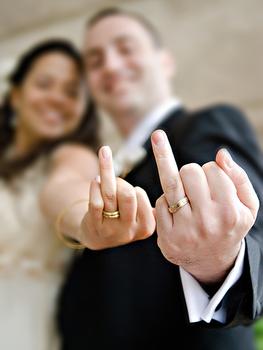 Back when I was studying, I worked at an office supplies store part time. This place was surprisingly entertaining to work at. It was in a college town so most of the employees were in the 18 to 22 range. There were a few bosses that were a bit older and working there I got to hear a lot about the lives of everybody working at that office supply store.

One of those bosses was a late 20’s guy that was recently divorced. His story is something that shows all in one how not following your instincts as a man can completely fuck you over. Listen up.

Waiting Until Marriage: The story

Steve grew up very religious. He was taught that the only time he should have sex with a woman is after marrying her. He was devout and he followed and did as he was told. He ignored his urges to be with any woman and stayed strong.

Steve could have got laid had he put in the effort, he was not good looking, but he wasn’t bad looking either. Just a normal looking guy with normal skills with women.

Then, Steve met this girl. This girl was part of the same religion as him. Steve was very attracted to this girl and confused this desperation with love. They started dating and it advanced as any religious relationship should, proper dates leading up to a proposal from the man.

One day Steve proposed to her and she said yes. Steve was very happy. He was about to marry an attractive girl and, as he told this story, he highlighted his excitement at the idea of FINALLY being able to have sex. Something he had waited his entire life for.

Steve learned that her anxiety was for a different reason. His bride-to-be wasn’t the perfect virgin she had told him she was and she knew that on her wedding night he would find out. A more common thing with women than you would think.

Steve looked at her and felt nothing but, as he put it, “passion.” His anger at her deception was pushed to the back of his mind as he reassured her that he still loved her and wanted to marry her. He was too close to go back now and she was an attractive woman.

“Everything will be OK.” Steve told her. “We will learn together.”

Waiting until marriage: The Honeymoon

The wedding came and everything went just as it should. Steve was now married and it was time for him to do the thing he had been waiting to do for his entire life… sex.

They lay in bed and he took off her clothes, piece by piece. He clumsily had sex for the first time, he felt very nervous with thoughts of being compared to her more experienced previous lover.

He admitted that he hadn’t lasted long before he rolled off of his bride. It was a unique feeling and he wanted to try again. He climbed back on top of her, ready to explore more of gods greatest feeling gift to man.

She pushed him off him and pretended to sleep.

The next week of their honey moon was filled with activities that kept them out of the bedroom. When they would finally go back to the hotel to sleep, she would make excuses as to why they couldn’t have sex.

Steve didn’t know what to think. Was this normal? He tried to be a good and understanding husband and respected her wishes. Totally less than 5 minutes of sex on their week long honeymoon.

Waiting until marriage: The Marriage

He tried to be the good religious man and stuck through all of this, thinking to himself that his own desires were not as important as the marriage. Then, one day she said she wanted a divorce.

Waiting until marriage: Oh fuck! What have I done?

Steve still felt the sting of rejection while telling the story (the divorce only happened a month earlier), but overall he knew that it was for the best. He had lost two years of his life and waited his entire life to have sex with a girl who didn’t even want it, but at least it was all over.

“Why didn’t she want sex? What’s the real reason?” I asked Steve.

“I might have been too big for her.” He said laughing. “The thing that bothers me was that she had sex many times with her ex-boyfriend and enjoyed it.”

Why she didn’t want sex

Steve might have just been trying to brag and say he was well hung, but it’s very possible he was big and she had a tiny pussy. Dicks and pussies are like puzzle pieces. If you have a big dick and a small pussy, the girl will not be happy. If you have a small or normal sized dick and she has a huge pussy, nobody will be happy. People have different genetics that give them different things and there are people that aren’t sexually compatible. This is the price he paid for never testing the merchandise before purchasing.

People with a lot of experience with women know that the key to making a woman happy in the bedroom, isn’t so much what happens in the bedroom, it’s what happens outside the bedroom. It’s how you make her feel about her. Women care about emotions when it comes to sex. You have to game her and make her want you. Tease her and make her chase you always and tons of other things that I have written about in my books. I’m sure this guy wasn’t doing that and this could be a reason that he paid the price.

I believe 100%, that a man should NEVER have a relationship with a girl more sexually experienced than him. The man is supposed to lead and how can he lead if his girl knows more than him and is constantly trying to show him that. If he would have married a virgin, this could have been a very different story, but he didn’t. He married a girl more sexually experienced than himself. His errors were, of course, obvious to her after she had dated a guy quite some time with much more sexual experience than Steve. This could be one of the main reasons why it all went so bad.

She wasn’t a sexual person

There are girls out there that just don’t enjoy sex much. Maybe it’s because of something that happened to them as a child or maybe it’s because of some hormone imbalance, but they will never really enjoy sex. His wife could have had sex with her previous boyfriend simply because of how much she liked him. He had gamed her and she had rewarded him with doing something she didn’t enjoy. Now that she was in a marriage, she didn’t have to pretend anymore… she was locked into his life and wasn’t going to do something she didn’t want.

Problems with waiting until marriage

I grew up in a religious household. I saw friends waiting their entire lives for sex, just to rush into a marriage because of their desperation to finally experience it. It led to their unhappiness, but they would stick it out for their beliefs.

Some of them weren’t physically that attracted to their wives. They had been hiding various defects, smells, too small pussy and many other things. Some of them had married girls with a complete disinterest in sex. These guys play the lottery with their sexual happiness. All they could do was hope they got lucky and the girl they chose was what they wanted in bed.

If only these guys and Steve would have just tested these girls out. If only they had pushed for sex, just to know how these girls really were. This is part of the reason I believe that a guy shouldn’t wait until marriage for sex. He should be more sexually experienced than her or, at the very least, they should be equally inexperienced.

If a man wants a happy marriage, I would always advise him to find a girl that has only slept with him. This is the best way to find a truly faithful girl, but he MUST be with her before marriage or risk a lifetime of unhappiness.