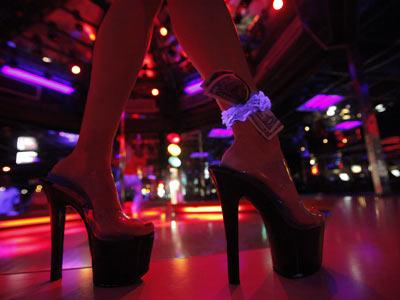 I’ve been absent from swoop for many weeks now, I’ve gotten into some trouble and I need to make a lot of money.

Because desperate times call for desperate measures I went to an oil rich area and started working as a “roustabout”.  This is basically the shit job of the oilfield. I also got a job working at a roadhouse style strip club working as a bouncer.  I was happy about that at first because it allowed me to work inside and it’s comparatively much easier. My buddy (we were rangers together in the same company) was the assistant manager so I felt good about getting hired on full time.

My first night I had to throw out three drunk roughnecks who were hell bent on fighting just because they had to go. Two other bouncers besides myself hunked these guys out the door and smashed them pretty quick. One bouncer is a former marine that I’m pretty sure was kicked out for mental issues and the other guy is a big tattooed Samoan.

I took my guy down with a double leg and held him there before bouncing his head off the ground, this helped the marine who is just too small for this job. These guys out here are as tough and as crazy and as hard a worker as anyone I’ve ever seen, but they aren’t trained fighters and it’s funny seeing them when they realize being tough is just one part of throwing down.

Anyway, I’d hoped to get on full time, it’s a strip club where these oil field guys spend ALL their hard earned money. In other words, a bouncer can make between 6-7 grand here a month cash.  It’s way better than busting your ass for 6 grand in two weeks that’s taxed and then having two weeks off spending it all (oil field workers are on rotation usually).

The only obstacle being that the general manager was a complete chump and actually knew nothing about running a strip club, let alone any business. How he got lucky enough to get that job is beyond me.

The next couple days over the weekend seemed ok, I threw dudes out when I had to and calmed things down when I could.  This place is like the Wild West, everyone has a gun or a knife or just a big razor blade they forgot to take off after leaving work

I can’t tell you how many big ugly knives I’ve found patting these guys down.

At any rate, the owner came back from out of town, a big tall guy who had a deep voice and when he shook my hand he looked me in the eyes, so it came as a surprise to me when I called the general manager on Monday to see if I was getting extra shifts that my buddy and I had both been fired.

I was extremely disappointed and my buddy was worse. We share a room that we pay 1200 dollars a month for.

In other words, I’d been in this hell hole a week and now I had 600 in rent due and if just been fired from the job I wanted and my 2nd best option at the moment was a miserable job that was only going to get more miserable as sub zero weather set in, and I had just quit it because I thought I was getting more shifts.

Something had to happen, and soon.  My situation was dire at best.

To be continued in the The Roadhouse Chronicles…..