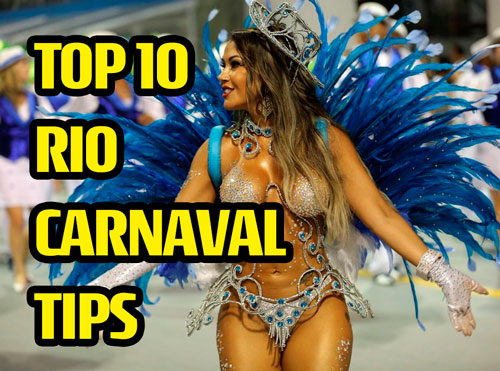 What is Rio Carnaval

When people hear Rio Carnaval, most of them think about the parade and the samba schools. However, this is only a small part of Rio Carnaval. The real party takes place in the blocos.

Blocos are street parties. They start a few weeks before Carnaval and they reach their peak in the official Carnaval weekend when there are countless blocos all across the city.

Contrary to what many people might believe, Rio Carnaval it’s not one giant crazy sex party. I had less sex during Rio Carnaval than before or after. During the actual bloco parties, girls are there with their groups of friends and it’s hard to isolate them. It’s more about having fun, getting wasted, dancing and making out.

But it’s is wild nonetheless.

It’s the best and easiest way to meet tons (and tons) of girls. I’ve never made out with this many girls over the course of a week ever before in my life. It must have been over 50 and some of my friends had more (a nod to my friend Smooth Operator; he didn’t steal this name).

So today I bring you my top 10 Rio Carnaval tips to get the most out of it.

Let’s kick it off with some common sense Rio Carnaval tips. Rio Carnaval takes place during one of the hottest months in Rio: wear a decent sunscreen, factor 50 and take a small tube with you to re-apply during the day. Trust me, you’ll need it.

Also wear a hat. Many blocos are in streets and on squares where there’s little to no shade. People will actually hog the few places that provide shadow during the hottest moments of the day.

But you can’t party in the shadow so make sure you are protected. Partying during Rio Carnaval is hard on the body, you don’t want add a sunburn on top of that.

Carnaval is not the place to be sober. You’ll want to make sure you are between intoxicated and drunk from morning till evening. This means non-stop boozing in the sun. If you want to make it till the end of the week, you have to stay hydrated.

It’s easy to forget about it when you’re having fun, but for every two beers you should buy a water. This will also help mitigate your hangovers. You’ll thank yourself in the morning!

Rio Carnaval is very safe regarding violence. I only saw one fight. Quite remarkable actually, given that so many drunk people are closely packed in the blistering heat.

But the atmosphere is always friendly and people are there only to have fun. Brazilians gonna Brazilian.

I’ve seen it happening in front of me, I’ve felt them trying to do it to me and two of my friends had their phones stolen.

You are in a crowd that’s often moving and dancing, even if you put your phone in your front pocket, you might not notice when it gets stolen in the party chaos.

I highly recommend getting a money belt and putting your phone in it, as well as most of your money. See the pic below.

4. Stand out from the crowd

On to the swooping Rio Carnaval tips. Nearly everybody in Rio Carnaval will be dressed up in a costume or with makeup. A costume is called a “fantasia” in Portuguese.

Make sure you stand out from the crowd. Most people will wear one of the ten different fantasias that are popular that year because they are sold all over Rio and they are cheap. You’ll see the same ones over and over again.

I recommend to invest in your fantasia and buy something original and different. Or if you are with a group of friends, you may all wear the same fantasia, so you stand out from the crowd.

Me and my friends all had original fantasias in the same theme and we attracted a lot of female attention because of it.

One of the days we decided to change our fantasias for variety and all of our success-rates dropped by a lot. It’s worth the investment.

There are countless blocos all over the city every single day. They vary in size and music styles. Some have famous artists and attract different crowds. It’s hard to know which blocos are the best.

The vibes between different blocos can be completely different. At some blocos it would be hard to meet a single girl, whilst for other blocos it was like shooting fish in a barrel.

You can download an app for your phone that gives you an overview of all the blocos for every day of the Carnaval, but do some preparation and ask the locals which ones they recommend.

Okay, this is another KEY Rio Carnaval tip. The blocos have a beginning and end time. You have to arrive ON time for the blocos. Don’t arrive in the middle of the bloco.

You have to experience the build-up of every bloco so you are on the right energy level and you are ‘part of the party’. If you experience the bloco from the start and feel the party building up, you’re going to have a lot more fun and you’ll do a lot better with the girls.

Since you are drinking booze AND waters to keep yourself hydrated, you should think strategically about peeing and not leave a chance unused to pee whenever you can.

There are usually long lines at the urinals and each time you’ll have to find your friends again in the huge crowds, which can be a challenge.

You can try to pee in side alleys but there are pretty steep fines for public urinating, so watch your back when you do it. We had to make a run for it once when we were caught.

“Mata leão” is a Brazilian expression that means “killing the lion”. It’s a technique to kiss women.

Remember it’s Carnaval and you are in Brazil. When you’re talking to a girl and she doesn’t want to make out with you, there’s no point in getting her number.

You are constantly on the move and keeping track of your friends, so you’ll have to keep the interactions short and powerful and you have to escalate quickly. If she’s into you but is giving you some playful resistance, it’s time to “kill the lion”.

You wrap your arm around her shoulder, grab her and just go in for the kiss. It’s a bold move but it works like magic. Brazilian guys are generally much more aggressive with their sexual advances and the women are used to it.

Disclaimer: Calibrate this move well, it goes without saying you have to read the situation correctly.

This is another Brazilian expression. It means “to get zika” (the virus). You “get zika” if you kiss with a less attractive girl. But it’s usually given a positive spin however.

The first girl of the day to open and to kiss is usually the hardest. A good approach is to get it out of the way immediately and just make out with the first (bangable) girl you cross-paths with. Even if she isn’t the hottest girl of the bloco.

You just “get the zika”, and boom: You’re instantly in the mood to kill it for the remainder of the bloco.

10. It’s all about the numbers

Like I said in the intro, Rio is not the crazy sex party many people believe it to be. It’s possible to get laid on the night blocos when they’re almost over, but you main focus will be on getting numbers and meeting up with the girls after the Carnaval, when the city becomes normal again.

Pro-tip: Make a list of the girls to keep an overview, because there could be a lot. Take a selfie pics with them too so you can remember them (at least a little bit).

Only take the numbers of the girls who are worth it or your phone will be clogged.

Also don’t wait one week before you start texting these girls, because they will forget about you too. They also meet tons of guys during Carnaval (don’t think about it).

Don’t assume these numbers are solid. It’s a lottery. For many of the girls you meet, either the momentum will be gone before you get a chance to meet; they met somebody else meanwhile, or if they were from out of town, they may have already left Rio, etc.

A ton of things can go wrong, it’s a numbers game; so get a lot of them (it’s easy).

The week after Carnaval is critical. Plan as much dates as you can right after the Carnaval week. I was able to convert about 1 in 3 Carnaval number close into a lay, which is a very good ratio given the shallow interactions and pitfalls.

Rio Carnaval is crazy; it’s hard on the body but so much fun: non-stop party!

We did 2 to 3 blocos per day for one week straight. By the end I was glad life went back to normal.  I had enough party and drinks for a while; I didn’t even go to the “After-Blocos” – which last up to two weeks after the official Carnaval ends.

Here are some final stats on my Carnaval experience: