This is a flashback post I wrote a while ago on my first day in Thailand. It’s a story from the very first day I started traveling back in 2012. Before I met 20Nation, before Swoop.

I had just broken up with my girlfriend, cancelled my apartment and quitted my job. The decision was made: I’m going to travel the world. My first destination would be Thailand. I wanted to discover this beautiful country and especially… the beautiful Thai women. So three weeks before I my trip began, I joined an online Thai dating site to see what I could expect.

I didn’t even know the word “pipelining” at that moment, but using the dating site I built up a connection with multiple Thai girls. In stead of going for quantity only, I invested some time with the girls I liked most and even Skype’d with them.

By the time I left my home country, I had a pretty solid connection with about 7 Thai girls.

I wanted to travel the world but I had absolutely no plan. I was gonna wing it start to end. I had very little travel experience at that time, so I figured I’d start out at Bangkok’s backpackers’ district. My first introduction to Kao San Road.

My taxi dropped me off and I took a random hotel that looked clean. I unpacked my suitcases and looked from my balcony to witness a jungle of bill boards, hectic salesmen and Thai street food stands. Only then I realised: I’m in Bangkok. Let the adventure begin!

I called and messaged the 7 girls I had pipelined expecting all of them would show up on a five minute notice. However 3 of them didn’t answer and another 3 told me they couldn’t make it that day. “Holy shit”, I thought, it’s is not looking good for my first day.

Only one more number left to try…

She wasn’t my favourite girl on my list but I was happy when she answered her phone. I asked her if she could meet me at night in Kao San Road at 8 pm. A moment of silence followed…

“Euhm… sure, I’ll be there. We can meet in front of  the McDonalds!”

My first date with a Thai girl

At 8 pm sharp my date arrived. She wasn’t very cute (6/10) but she was very young, petite and had a sweet smile. I took her for a drink in a bar near my hotel that wasn’t too loud.

Her English was not great either but decent enough. I got her to laugh, teased her and after 30 minutes she was holding my hand. After 2 drinks I got her to my room to “watch pictures on Facebook”.

We started making out on the bed, she was a bit shy at first but it was easy to bang her. My first Thai flag conquered less than 5 hours after landing.

After sex we are just chilled in bed and had some nonsense pillow talk. I was enjoying my afterglow (back then I still had afterglow from new girls).

Then I saw I had several missed calls: It was one of the girls that hadn’t answered my messages earlier. She had left a voice mail: “Sorry na, I missed your message. I come Kao San Road 11 pm ok na? Cu there!” I looked at my watch, “Shit, that’s in 15 minutes!”

I enjoyed chilling with my girl but I told her she had to go because I felt jet-lagged. She was sad but understanding. She got dressed so slowly, I felt the urge of rushing her but she was too sweet so I remained patient. I kissed her goodbye in the elevator, headed back to my room and waited a strategic 5 additional minutes before going out to meet the new girl.

My second date with a Thai girl

She was also waiting for me in front of McDonalds but I couldn’t find her. It turns out there are 2 different McDonalds in Kao San Road and of course she was waiting at the other one.

We finally found each other and she was looking a lot cuter than the first girl. She was wearing sexy shorts and high heels. She was acting annoyed because I was 15 minutes late. I laughingly called her Angry Bird (that game was very popular at the time) and soon after her mood was great again.

I did the exact same routine as before and even took her to the same bar. The waiter gave me a wink when I showed up with my second date (he would also see the other 5 the coming days).

After one drink we ended up in my room again to check out my Facebook pics (any excuse will do) and boom: Eight hours in Thailand and I already doubled up. I was already in love with Thailand. My initial plan to stay two weeks became two months.

Even to this day it’s still one of my favourite travel locations.

A very strange observation; I’ve banged hundreds of girls since that day but I still have a special affinity for those first 7 girls from my very first trip to Thailand. In my memory, that first month in Thailand seemed to last forever, while my current trips seem to fly by. 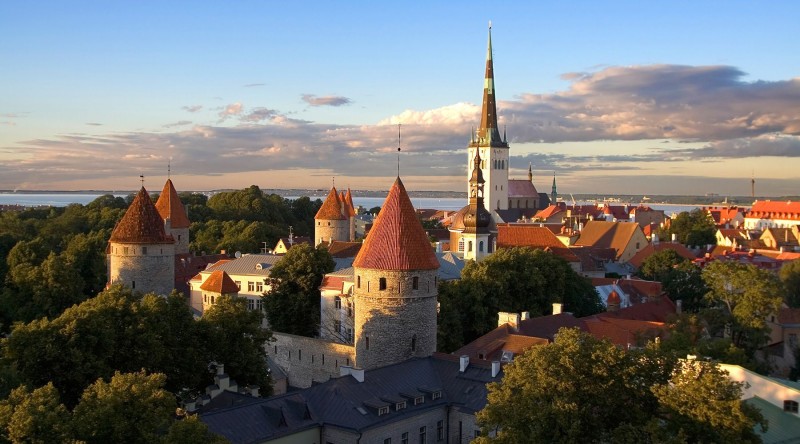 Tallinn, Estonia Like Being in a Medieval Film Filled with Hot Blonde Women