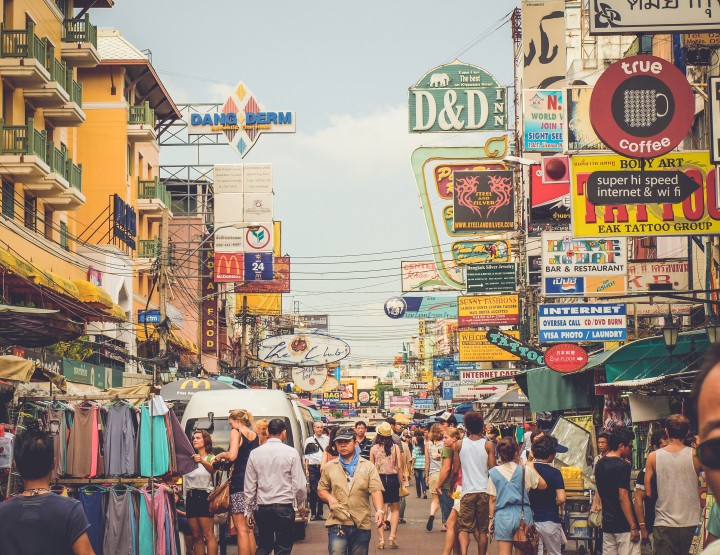 Khao San Road is the most famous backpacker street in Bangkok, maybe even Asia, maybe even the world. It’s cheap, it’s loud and it’s full of people 7 days a week.

A lot of people like to bash on Khao San Road.

“I can’t stand being around those people!”

Guess what else it’s full of : Foreigner hunting Thai girls!

If you want hook up with a party girl, actively on the look for farang? It’s the place to be. There’s plenty of them every day, they’re there to get drunk and 95% of the backpackers are clueless chumps, trying to seduce the Austrian girl from their hostel with that sexy sunburn.

I admit. I also don’t like the crowd there. But I either tune them out, or get so drunk it doesn’t bother me anymore.

Every time I’m in Bangkok I go out at least a couple of nights Khoa San Road and I almost always have a blast.

Moreover, I can count on one hand the times I went home alone from this street. I estimate I pulled over 20 Thai girls from there and occasionally a tourist girl (non-backpacker).

Time for another Bangkok classic

Every night in Bangkok as the potential to spiral out of control. This evening started out pretty mellow. I met up with my friend K-Dog and some of his buddies. We went to a small Thai restaurant in On Nut; delicious food and ice cold beers.

Excellent service too. The waiter never missed a beat with our rounds of beers. As the beers went down, the urge to out went up. K-Dog and I were talking about the good ol’ days, so we decided it was time for another classic Bangkok night: Let’s go to Khao San!

The four of us took a taxi to Khao San road. It was still early, so we sat down at one of the smaller improvised bars at the beginning of the street and continued drinking beers.

But something new had appeared, the laughing gas ladies.

They sold balloons of laughing gas 3 years ago as well but you wouldn’t see them every day. Now it had taken off completely. We ordered a round of balloons to go with our drinks and this kicked the party mood up a notch instantly. It’s like a mini-hit of MDMA that only lasts for 5-10 seconds. A few moments later we had our dedicated balloon lady sitting next to our table. The DJ of our little bar was playing some seriously sick EDM tunes. We made it a game to try and align the high from the balloons with “the drop” of the songs. It’s fucking addictive. It can’t be good for your brain, but it was a lot of fun!

As fun as it was, we had to move if we wanted to find some Thai girls. We already had a solid buzz going the crowed had arrived. We said goodbye to our balloon lady and DJ and went to my favourite bar on Khao San.

I think it’s called RADAR bar; it’s located next to the “The Club”. The first time I came here was almost 4 years ago and there was still some of the same staff working there! One of the waiters recognised me and fixed us a table.

I ordered a round of “buckets”; it’s a gimmick from Khao San Road where they serve cocktails in a small buckets full of ice. I told him to make them extra strong. And damn, they didn’t fuck around. These cocktails had a kick.

I like this place because people aren’t that fixed to their own tables. It’s very easy to socialise with everybody in the bar and you usually end up at another table with a group of Thai friends. It used to be even better when they still had shisha but unfortunately it’s banned now. The buckets really did their work. Suddenly, I lost everybody. So I went around the bar and started dancing and kissing with this random Thai girl. She was with her friend and they wanted to go to another bar.

I figured the other guys were already home so I joined these two girls to some back alley club nearby. I would never be able to find it again because things were already getting blurry at this time. It was away from the main part and crowd, I remember we had to take some side streets to get there.

There seemed to be no other foreigners, just Thai people. A mix between a bar and a club. Very dark, loud music, two floors and some pool tables. The place wasn’t even that big, but I managed to lose the girls I was with anyway.

So I lonewolved around and found another girl on the second floor. I mumbled my best drunk Thai pickup lines and we made out. I don’t remember any details from this point. She was with a mixed group Thai friends and they had to leave. Too bad!

I went back down and I found the two girls from earlier again. But by now my vision had doubled and I accidentally started grinding the wrong one. This might have fucked up this set because the other one got angry.

Maybe I was just too drunk. Fuck, you better call it a night THC!

Could this be a night at Khoa San Road without pulling a girl?

I’m stumbling around looking for the exit in this dark club when I run into on another Thai girl. This one was actually cuter than either of the two friends. We danced a bit and and she seems very DTF. We make out and tell her: Let’s go.

She just grabs her purse, said goodbye to her friends, took my hand and we walked out.

The next day I met up again with my friends to try and reconstruct the night with the pieces of information we remembered. They had similar stories. They all got lost too and I think all of us ended up with a Thai girl in bed.

The funny thing about Bangkok is that this does not even rank high on the party scale. It’s like a 5-6.

A few days later, I went full-BKK. Story for next week.